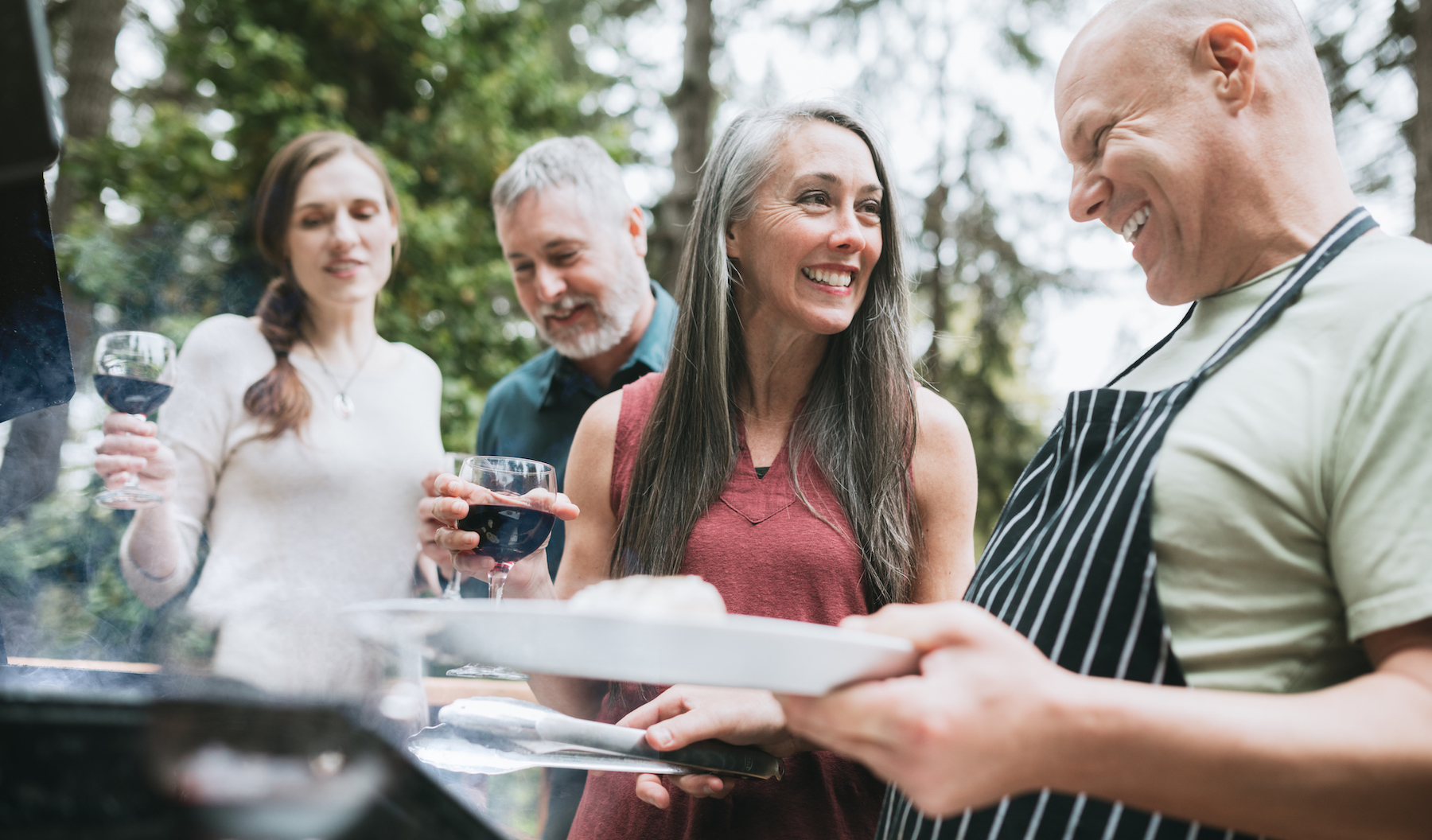 For the longest time, the answer to the question of what wine to drink with a summer cookout has remained, like so much of wine and food pairing, horribly conventional. With an expectation for a meal featuring smoked or char-grilled red meats slathered in sauces ranging from tangy, to spicy, to sweet, sommeliers and wine writers have long recommended robust red wines from Cabernet Sauvignon to Zinfandel. Lord knows, I’ve opened my share of Zinfandels with baby back ribs, and big California Syrahs with burgers over the years, and to be honest, I’ve never been truly satisfied with the experience.

It’s not that there was anything wrong with these wines, it’s just that they didn’t perform one of the main jobs that you want your beverage choice to do when you’re standing around in a sunny backyard or park grilling with friends. And what is that job? Well, here’s a hint: there’s a reason that most people like to drink beer while they’re barbecuing.

After drinking nearly everything under the sun—and by that, I mean drinking all sorts of wines while standing in the sun with a plate of food in my hands—I’ve decided the one quality that truly makes for a great cookout wine…

It has to be refreshing.

For me, that means it needs to be chilled, it must have great acidity, and it has to be a partner with whatever you’re eating, not the main event.

I should probably also make clear that I don’t believe in wine and food pairing, at least not as the wine industry typically talks about it. I don’t believe that there are perfect pairings that work for everyone, nor am I of the opinion that there are a lot of 1+1=3 experiences out there where the marriage of food and wine leads to revelation or transcendent pleasure.

What I do believe in, however, is drinking good wine with good food, and enjoying both while you do. And that need not be restricted to the dinner table or white-tablecloth restaurants.

Here are three kinds of wines that I think offer a better barbecue drinking experience.

Just like the traditional American Thanksgiving meal, summer cookouts present a conundrum to those who believe in strict wine and food pairing (while, in my opinion, reinforcing the idiocy of the whole endeavor). We’re likely to have so many different flavors and textures on our plates at once, that the idea of a perfect wine match is laughable. That said, if there’s one wine that might traditionally be thought of as a complement to many of those flavors, it’s a rosé.

The best rosés are brimming with acidity like a white wine, yet often have berry and herbal notes that can keep them from being overwhelmed by what can be pretty strong flavors coming off the grill.

There are two additional great things about rosé that make it perfect for grilling get-togethers with friends: there’s a wide variety to choose from and they’re not all that expensive. I’m an equal-opportunity rosé drinker, but I especially love the mineral-driven, pale rosés from Corsica and Sardinia, or Puglia on the southeast tip of Italy.

Pale rosé is quite in fashion now, thanks to the superstar pink wines of Provence, whose popularity, it must be said, has had a very positive effect on domestic rosé. Winemakers in California are now making excellent pink wines from Grenache, Pinot Noir, and yes, even Zinfandel.

But lighter doesn’t always mean better with rosé, and there are some great wines with darker hues, such as pretty much anything called Cerasuolo from Italy, or the darker rosés from the French region of Tavel.

If you’ve gotta drink red wine with your grilled or smoked meats, then instead of something big and dark I recommend something crunchy, a term that has become a common descriptor for lighter-weight, lower-alcohol, higher-acidity red wines, often without the strong influence of oak (and the tannins that come with it). These wines also respond well to chilling, which adds an extra sense of refreshment to their zippy, mouthwatering personalities.

Crunchy reds abound in wine regions throughout the world, but these wines and the places they come from tend to be a little off the beaten path. If you don’t mind a little exploration (something that the world of wine rewards most generously with newfound flavors and experiences) you’ll find a richly gratifying category of wines that are delicious and fun to drink.

The red wines of the Savoie region of France, especially those made from the grape Mondeuse, offer wonderful flavors of berries and savory green herbs, with the best examples showing an incredible floral perfume.

While we’re in the southeastern part of France, let’s not depart without considering Trousseau and Poulsard, both signature grapes from the Jura region, and both brimming with sour cherry and berry flavors.

If you’re cooking with fire, you could do worse than to drink wines of fire, especially the red wines from Sicily’s Mount Etna volcano. The grape Nerello Mascalese offers a lighter-bodied, but still structured wine that beautifully transmits the stony minerality of its volcanic origins.

The grape we call Mission in California is known by various other names, including Criolla Grande and País in South America, and Listán Prieto in the Canary Islands, but no matter its name, in the right hands it can be a wonderfully juicy and bright wine with notes of herbs, plum skin, and berries.

Skin-contact white wines, also known as orange wines, are having something of a moment right now. These wines are the result of using red winemaking techniques (letting berries soak in contact with their juices for a while) with white grapes, yielding wines that range in color from dark gold to amber to Halloween-pumpkin-orange. They’ve recently become very popular in part due to their close association with natural wines, which have become quite trendy especially among younger wine drinkers. While many people would suggest that orange wine means natural wine, I’d like to set the record straight and make it very clear that they are two different things. The Venn diagram of these two wine types may have an overlap, but there are plenty of orange wines that wouldn’t qualify as natural because of their use of sulfur.

The flavors you’ll find in orange wines vary considerably, but often include a wonderful earthy, autumnal note, like the smell of wet leaves on a fall day. Because of their long maceration with their skins, they also tend to have tannins, giving them much more structure than a white wine, with the ability to complement any number of different foods.

Like rosé, orange wines can be made anywhere in the world from many different grape varieties, but if you’re going to start your search somewhere, you might as well begin where scientists believe winemaking began: the Republic of Georgia. Using grapes such as Rikatsiteli, Georgia is the original home of orange wines, which for roughly 8,000 years have been made in huge terra cotta jars known as qvevri that are buried up to their necks in the earth.

Other countries particularly known for orange wines include Austria, France, and the United States, but just ask your local fine wine retailer what they might have in stock.

Time to enjoy your BBQ

So next time you’re ready to grab that plate of macaroni salad, potato chips, chicken wings, watermelon, and barbecued ribs (or whatever summer cookout food means to you), throw some rosé, crunchy reds, or orange wines in a cooler full of ice and see if you don’t agree that they make for a much better barbecue wine experience.

San Francisco Magazine has called Alder Yarrow “The Wine World’s Brightest Cyberstar” and he is widely accepted as a pioneer of wine blogging. He has been publishing Vinography.com daily since 2004 and was nominated for a James Beard Award in 2013. He is currently a monthly columnist for Jancis Robinson, and the author of The Essence of Wine, a coffee table book about wine's flavors and aromas that was named one of the best wine books of 2014 by The New York Times. In 2013 Alder was inducted into the Wine Media Guild of New York’s Wine Writers Hall of Fame, an honor he shares with only 24 other living wine writers.